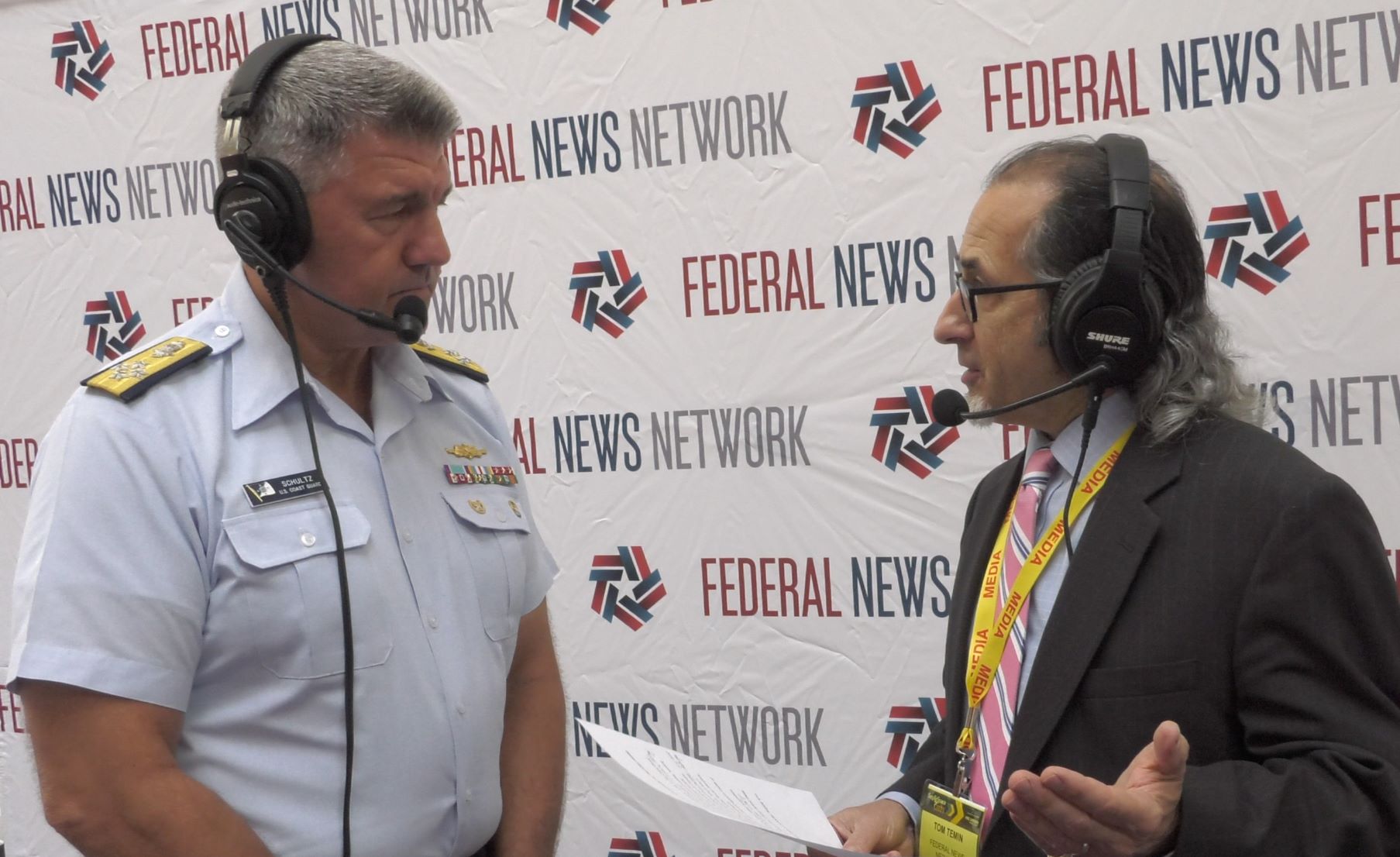 The best listening experience is on Chrome, Firefox, or Safari. Subscribe to Federal Drive’s daily audio interviews on Apple Podcasts or PodcastOne.

The Coast Guard operates in a field no less dynamic than any other branch of the military. As an organization, it is recapitalizing itself and tackling diversity and climate change. For an update, during the SeaAirSpace conference, Federal Drive with Tom Temin caught up with Coast Guard Commander Adm. Karl Schultz.

Karl Schultz: I think first and foremost, we’ve focused on my watch over the past three years on Coast Guard readiness. And I think we’re making progress on that. I will continue to step on the accelerator here to elevate this conversation within the administration, the new administration, and the president’s budget of 22 makes it seem like this signal is being heard. We will continue to deepen this conversation on the Hill with our appropriation committees. And they’ve been receptive to it. I think the Coast Guard, not I think, I know the Coast Guard has reached an unprecedented level. The demand for our services here, both in national missions and in support of geographic combatant commanders around the world, has never been higher. Even through COVID, we were as busy as ever. So we will continue to develop the capabilities of the Coast Guard in places where I believe we offer unique capabilities on the national security front. And that’s what I talked about cooperation, competition and lethality, in this phase of competition, I think the Coast Guard brings something really unique here. So I think we’re going to put abilities into the conversation.

Tom Temin: And when you say the message on the budget is being heard in terms of readiness, what does that translate to, where do the dollars for readiness go?

Karl Schultz: Yeah, so Tom, in the last decade the divestiture was around 2013, the eight or so, seven, eight years after the divestiture we’ve lost about 10% of purchasing power, operations and support. . That’s kind of how you are part of the Coast Guard, on the people’s side. We have made progress in capital programs, buying ships and buying planes. But really, to be ready, we have to get some of that O&S funding. And we, in fact, 4% in 20, 6% in 21, 22 put us up there six plus, 7%. So I think a three to five percent positive trajectory over the next decade could really set us up for a Coast Guard ready.

Tom Temin: And review some of the overseas activities that people often don’t realize the Coast Guard is so heavily involved in. And during your presentation to SeaAirSpace, you mentioned the fact that you work with some of the Southeast Asian coastguards that are piling up because I guess they are worried about China as well, so …

Karl Schultz: I’ll take you around the map very briefly. On a persistent daily basis, I have more than four, usually closer to six or seven cutters off the northern coast of Colombia and also in the Caribbean Basin doing counter narcotics work, working for the US Southern Command typically uses three to five airborne uses of -force helicopters that enable these missions. We have 250 Coast Guard men and women in the Persian Gulf, six patrol boats, two brand new patrol boats that just reported back in May. So quick response cutters will replace the remaining four, two more in the fall, two more in the spring, but they are active, as the NOC has spoken of, increasingly aggressive and unpredictable behavior, the Iranians in their rapid interception craft and all that, our Coasties are at the sharp end of that spear. We used warning shots to deter bad behavior there, Hamilton’s national security cover was right up in the Black Sea. In a way, as the Russians were building up forces in this region again, we went around the world, we partnered with the Georgians, the Ukrainians, we had some old Coast Guard assets transferred through of the excess defense items program there, so it was great to go out and partner with them, it kind of bolsters their power as they push the bad regional players out there. In the South Pacific, I just got back Friday night from Central Pacific, Western Pacific trip, we were in Guam, we were in Saipan, we were in Hawaii. And the coast guard is over there, we are over there in Oceania, condition three of these quick response cutters in Guam, we have our national security cutter working for the seventh fleet right now that will do a very important job. in the coming months.

Tom Temin: And as this type of work increases, does that translate into the capabilities and design elements you need in ships under construction? Oh

Karl Schultz: Ah absolutely. What I didn’t mention are the high latitudes. So we’re building the first heavy icebreakers the country has built in almost half a century. Polar safety cutters. And we should start cutting steel here for the remainder of this calendar year. And we have a record program for up to three vessels, the first two are funded. So this is a critically important element, the Coast Guard is a lead agency in the high latitudes. And we’re going to bridge the gap here until this new polar security comes along with the Pole Star, she’s 46, but we’re going to bridge that gap for another five to seven years. It is therefore a place where the Coast Guard is of crucial importance.

Tom Temin: And when you think of the Arctic, that gets into the bigger question of resilience, climate change, and that’s a big effect on the Coast Guard, what do you think of the answer in the next two to five years? ?

Karl Schultz: So let me start when you say with the arctic so the extent of the ice is changing. There has been less ice every year for over 20 years. So up there, things change. This does not diminish the need for an icebreaker. In fact, there is less […] ice, more ice in motion. The demand for icebreakers is therefore higher. So we must continue to build these ships. We need to look at the other seven legitimate Arctic nations, we need to look at China, which is a self-proclaimed nation close to the Arctic and what its interests are in the Arctic, and we need to project our sovereign interests and capabilities there to temper that. Climate change, as we build facilities, we have a lot of old infrastructure where we build new facilities, they have to be informed by sea level rise and that sort of thing, Tom.

Tom Temin: Understood. And what about airline assets?

Karl Schultz: So aviation, we fly fixed and rotary wing planes, we are making really good progress towards a fleet of 22 C-130Js that the president’s budget 2022, I think, contains the 18th C-130J, so this program advance. We are deploying some C-27Js that we received from the Air Force years ago, and that will bring new capabilities, […] our system on them, we will have things in common with our entire fleet of fixed-wing aircraft. The key thing about this, Tom, is that we have a fleet of 98 shell-dolphin aerospace helicopters that have also served, but Airbus no longer makes them so we’re struggling with the availability of parts, we’re going to so take our fleet of 45, 46 Jayhawk Sikorsky planes, we’re going to develop that north, somewhere north of 100. So as we reduce 98 and increase fleet to 60, that’s really the future of the Guard. Coastal Rotary Wing until you get the future vertical lift probably sometime in 2030 plus.

Tom Temin: So when you do that, you have more consistency across this fleet …

Karl Schultz: We’re going to have a rotary wing fleet, it’s just at some point towards a future vertical lift, which is making efficiency gains, there are a lot of customers for the 60s around the world. So there should be enough parts and things like that.

Tom Temin: And one of the priorities closer to home that you’ve highlighted a few times is advancing diversity and inclusion. And how does it all fit together? What’s the progress report there? And how do you do […] preparation and fighting spirit, and yet achieve these objectives?

Karl Schultz: Well, I’ll tell you, Tom, we strive to be a Coast Guard more representative of a nation we serve. And the Coast Guard is not as well known as the other services, we don’t have the big budgets for recruiting and advertising. So we had to go out to different places. Where you win in recruiting is retention. So when we bring somebody into the service, let’s say it’s a black woman, a black man, they need to see the same opportunities to move up through the ranks, they need to see all their shipmates pushing them. sort of toward the next rung of the ladder just like their white male counterparts. So we’re very focused here. I think we have success stories. We did a holistic female retention study in 2019 that gave us a lot of results. We have made many changes. We see, flash the bang, within 12 to 18 months we see indicators that these changes are helping us. We had about 5% delta over the careers of women compared to their male counterparts, it’s closing. We’ll be doing another RAND study here in the next couple of weeks or so, which will look at under-represented groups. The same kind of study, a holistic study, and we’ll have after that. We created this personal department working group at the start of my watch, we have kept it. And that’s how a study is not a shelf. This is the action, where we’re going to do the same thing we did with the study of women with the URM study.

Tom Temin: And closer to home, Wednesday is the Coast Guard’s birthday. So how do you celebrate, anyway?

Karl Schultz: We are therefore 231 years old. I think we look remarkably dynamic for 231. Yes, that’s a, you come back, the founding fathers, Alexander Hamilton was the first secretary of the treasury who asked George Washington for this thing called the fiscal maritime service to go. collect tariffs to pay for Revolutionary War bills. And here we are today where the Coast Guard still enables economic prosperity. So we’ll be in Grand Haven for the Coast Guard Festival. They are back this year. It’s a celebration… it’s the first Coast Guard town, then there are many Coast Guard towns. We will have a picnic here, a little further, not on the 4th, but I think next week, maybe on the 14th or so. And we’ll be celebrating with our Washington NCR crowd to celebrate the Coast Guard’s birthday. It’s just a day to reflect on what 231 years we are as an evolving organization. But we’ll take a break and celebrate all the good of being a part of the United States Coast Guard team.

Tom Temin: Admiral Karl Schultz is Commander of the Coast Guard. I spoke with him at this week’s SeaAirSpace conference hosted by the Navy League.