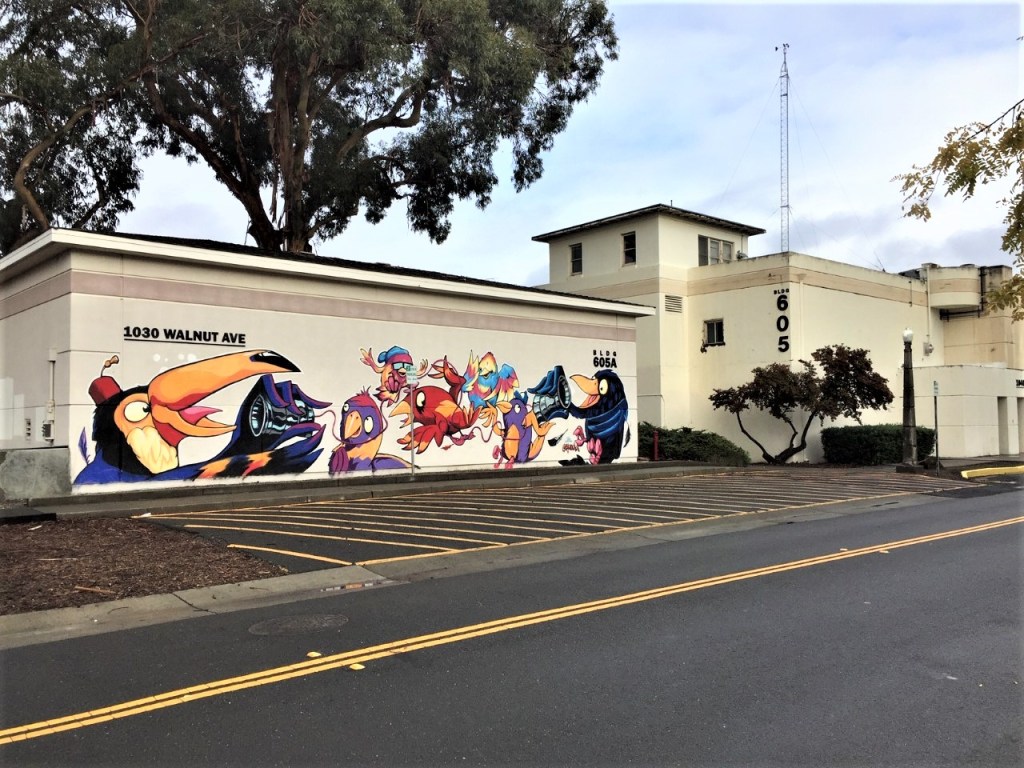 Two new murals recently commissioned by the developers of Mare Island are receiving mixed reviews from the public and have prompted the city of Vallejo to declare that pre-approval is required before more murals are painted on the historic buildings of the island. former naval shipyard.

One of the frescoes shows cartoon-style birds chatting on the phone. It is spray painted on a street-facing wall from building 605A, opposite the neo-colonial-style mansions built over a century ago to house the navy’s finest brass. The building is next to Building 605, a hardened concrete structure from 1942 known as the “Telephone Exchange”, an operations center that also served as a bomb shelter in the event of an enemy attack during WWII. global.

The other mural, depicting colorful algae and sea anemones, covers the entire north side of a large brick storage structure, Building 73, built in 1898 near old coal sheds overlooking the Strait of L ‘Mare Island. These hangars supplied coal-fired ships that were used by the Navy until the early 1900s. When petroleum replaced coal in the boilers of warships, Building 73 was used to store petroleum.

Critics say the two murals are inappropriate for their location, especially the bird mural located in one of the most historic areas of the shipyard, which in 1854 became the Navy’s first permanent base on the Western coast.

Tom D’Alesandro, president of west coast operations for the Southern Land Company, which develops Mare Island, said the two murals were part of art installations that will continue – but adds that they are both temporary and that the bird mural will be the first to go. He didn’t say exactly when.

D’Alesandro doesn’t rule out the idea of ​​more cartoon-style murals, but says, “We will explore places on Mare Island where playful ephemeral art is less likely to offend. “

D’Alesandro and Sheryl McKibben, the company’s head of marketing and communications on the west coast, also said there were plans for the art depicting historic events at the shipyards, and that there would be more efforts to present all proposals to the public in advance and to give commissions to local artists.

McKibben also said there had been “a lot of positive feedback from locals and visitors” on the two murals on display so far and the company’s art program in general. The seaweed and sea anemone mural was done by David Cho and the bird mural was painted by Eyan Higgins Jones. Both are artists from the San Francisco Bay Area.

Katy Meissner, Vallejo City Council member and artist, has a ‘don’t faint, it’s just paint’ perspective. She says her favorite is the seaweed and sea anemone mural, but added that the bird mural, while maybe out of place, is “pretty cool.” It’s a great way, temporary or not, to add another dimension, to change the space. If they try to paint over it later, people might come around to that. You just don’t know.

Critics include Chris Shields, who worked at the shipyard for 11 years until it closed in 1996. Shields says the bird cartoon mural does not belong to the historic officers area and next to it. the old “Telephone Exchange” building. He says the same goes for the large seaweed and sea anemone mural, adding that it is primarily its location, not the subject, that “disrespects the memory of the Navy and of all those skilled shipyard workers who helped earn our freedoms that we cherish today. “

Dalia Vidor, who chairs the Vallejo Culture and Arts Commission, says she can consider ways to “marry it all” with research and community involvement in planning future art installations in the historic district of Mare Island, which encompasses two-thirds of the entire island. Vidor would also like his commission and the city’s Architectural Heritage and Monuments Commission to be involved in the verification process.

Vallejo’s planning director Christina Ratcliffe, who oversees the AHLC, only heard about the murals after they were sprayed on the shipyard buildings. She says Southern Land has since been made aware that city surveillance is a requirement. “Murals on historic buildings should be reviewed in advance by the city to make sure everything is done correctly and to determine if a certificate of suitability from the AHLC is needed,” Ratcliffe added.

The Mare Island Historic District comprises 661 buildings and structures, 502 of which are considered historic assets. This includes Building 73 with the Algae and Sea Anenome mural. Building 605A, devoid of any distinguishing features other than its bird fresco, is not listed as contributing.

Mare Island was first named Isla Plana or Flat Island by Spanish explorers in 1775. According to one story, General Mariano Vallejo, who obtained large tracts of land by the Mexican government, changed the name after that one of his horses, a white mare, fell from a raft and was later found on the island. Another version shows that the mare ends up on the island after straying away from the horses that Vallejo’s workers or soldiers swam through Carquinez Strait.

The US government purchased Mare Island for its first naval base on the west coast in 1853 and the base opened in 1854, with David Farragut in charge as the shipyard commander. More than 500 ships and submarines were built at the shipyard, which reached its peak of employment of over 44,000 civilians during World War II. The shipyard operated until it closed on April 1, 1996 – a victim of federal budget cuts. The city of Vallejo then got the island, kept some area but ceded the large central core, mainly to property developer Lennar. Lennar’s interests have since gone to the Southern Land Company.

– Vallejo and other communities in Solano County are treasures of California history. The “Solano Chronicles” section, broadcast every other Sunday, highlights various aspects of this story. My source references are available on request. If you have any local stories or photos to share, email me at [email protected] You can also send any material care from The Times-Herald, 420 Virginia St .; or the Naval and Historical Museum of Vallejo, 734 Marin Street, Vallejo 94590.