There is a saying in US Navy aviation: No quick hands in a cockpit. This means that if a light comes on or something else happens to indicate an emergency, the pilot does not immediately begin pressing the buttons or pulling the levers. They pause, they breathe, they assess the situation, then they respond.

Three and a half years after starting his medical studies at the University of Colorado School of Medicine, Dylan Schoo sees daily parallels between what he is learning now and what he has learned as a US Navy pilot and flight instructor.

“In an exam room or in an operating room, when something happens, you step back, you breathe, you tap into your training and your experience,” says Schoo. “Before each flight, you do a pre-flight preparation where you look at what the weather is like, what the flight will be, what will I do if things go wrong, what is plan B and plan C, and in medicine you do the same. The rhythms of medicine are very similar to the rhythms of flight.

Still on active duty in the Navy, today’s national celebration of Veterans Day means a lot to Schoo – not just as a day to remember and honor all those with whom he served throughout his career as an aviator, but as he embarks on a new path to medicine and draws profound inspiration from the lessons he learned during his military service.

“One of the biggest takeaways for me is that the Navy is very safety oriented,” says Schoo. “The question is always what lessons can we learn from the past to ensure the safety of our staff in the future? I think it really helped my transition to caring for others and being determined to be the best doctor I can be, needing to work and study hard, to be approachable and compassionate.

“I always remember that people are not in the hospital because they are having a good day, necessarily, they may have the worst day of their life, or it may be the last day of their life. A big part of what will help me deal with them is knowing that I went through rigorous training programs before that prepared me for the worst day I could have had in the cockpit, and realize that the training has worked and that I’m actually ready to do what I need to do when I need to.

Chase a dream of flying

Growing up in Montrose, Colorado, about as landlocked as he could be with mountains or mesas in all directions, Schoo dreamed of flying. His uncle had served as a US Navy pilot and his grandfather as a Navy medic, so flying and the Navy are part of his heritage. Medicine is too: her father is an orthopedic surgeon, her mother a nurse and her sister a doctor.

Dylan Schoo’s view of the clouds from inside the cockpit

However, flying was his first passion – “I may have watched ‘Top Gun’ once too often,” he jokes – and in high school he got his private pilot’s license at the regional airport in Paris. Montrose. After declining an appointment to the US Air Force Academy, he enlisted at the University of Notre Dame and was turned down the first time he applied to join the ROTC in his freshman year.

It was an important lesson in learning not to give up and try again, he says, and he was admitted to the ROTC the following year, the same year as the terrorist attacks of September 11, 2001.

In his final year he was accepted for flight training and after graduating from pre-med, Schoo began training in Pensacola, Florida. He then went to Corpus Christi, Texas for primary flight training and earned the distinction of first in his class. There he was assigned to fly the E-2 Hawkeye, an all-weather command and control aircraft based on an aircraft carrier. He also trained on the T-45 Goshawk jet and later in his aviation career he was an instructor on the T-45. In October 2006, just after its 25th birthday, the call sign Butters gained its wings.

Every step and aspect of training brought him closer to joining Wing 2 of the aircraft carrier USS Abraham Lincoln Nimitz. “There’s nothing quite as exciting as the first time you feel that tug of the hook on stopping gear,” says Schoo. “You go from 120 miles per hour to zero in two and a half seconds. There is no such thing.

“Even before I land, I remember thinking, wow, I really hope I know what I’m doing. It doesn’t sound OK but it must be OK. There’s 1,000 people on this ship, they pulled out the rods from the reactor, loaded all this food on board, and this aircraft carrier is sailing here so Lt. JG Dylan can learn how to land. It was a surreal moment. “

Schoo completed two seven-month deployments to the USS Lincoln as part of the 5th Fleet, supporting ground troops in Iraq and Afghanistan. He then got a job as a Landing Signals Officer and then a Flight Instructor.

After 11 years of active service, Schoo considered his opportunities for advancement in the Navy if he remained on the flight instructor path, but ultimately decided to pursue medicine. In 2015, he applied to be downgraded, having achieved the rank of lieutenant commander, and was absent from the Navy for 10 minutes while completing the paperwork to be returned to service, this time back to the rank of ‘teaches.

He took a one-year post-baccalaureate course at the University of Colorado at Boulder to brush up on his math and science skills and applied to medical school. It was not accepted.

“This was another time where what I learned in the Navy really helped me, because you don’t just give up,” he explains. “You get up and you work even harder.”

Over the next year, he worked as a certified nursing assistant and resumed the MCAT, improving his score by five points. On his second try, he was accepted into the University of California School of Medicine, where he is now a fourth year student and is focused on pursuing anesthesiology. His military scholarship stipulates that he will have to serve at least four years after completing his medical school and residency, so he and his new wife, Erica, are currently considering which of several options to pursue.

Initially, says Schoo, he wanted to continue with the surgery, “but it’s true what they say, you will find the specialty that is right for you. The anesthesia is fine for me, as I will always be in the OR, but I will also have lots of opportunities to speak with patients and let them know that I am there to help them. 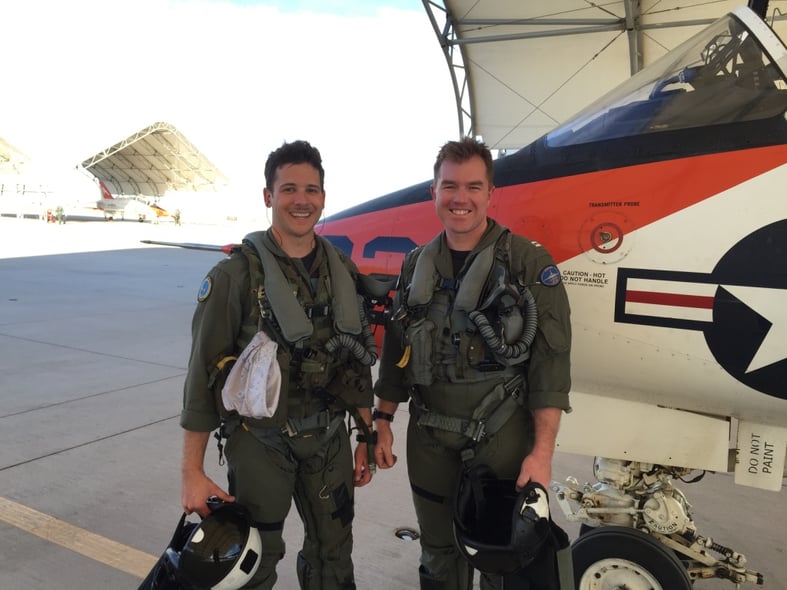 “There’s a team aspect to anesthesia that I really enjoy, it’s really similar to being in the cockpit and relying on the other crew members to communicate and tell me that there is a fire. “

About this fire: Once Schoo was training with an entire air squadron over Fallon, Nevada, when, once in flight, he noticed that the oil pressure light was on. One of his best friends was in the back of the E-2 on that flight and told him over the intercom, “Yeah, actually, we’re running oil on the right side. “

Schoo didn’t think it was too bad and that they could just go back to base, but his friend was back on the intercom saying, “Oh, yeah, we’re on fire.” Schoo checked the small rearview mirror and confirmed that yes there was a fire on the right side of the plane. After getting confirmation from each crew member to activate the extinguisher, according to protocol, he saw the fire go out and then roar back.

“At this point I know we have to get back to the ground and all of these training scenarios go through my mind – that it might hit the fuel tank, that it might melt through the wing, and we don’t ‘We don’t have ejection seats, just parachutes, “Schoo recalls. After emergency rudder adjustments, Schoo dropped the tail hook and landed the E-2 safely, later earning a medal of look for his job that day.

The state of mind that helped him land that day helped him in his medical studies, he says, because “as a doctor I can be faced with situations where lives are at stake. game and my actions will have serious consequences. I feel like I need to get the best training I can and work as hard as I can to be the best doctor I can be because people are going to be counting on me to help them get through some of the most vulnerable times. “