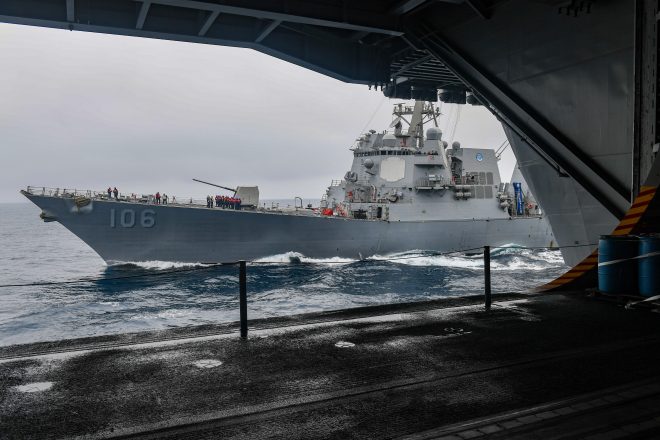 The following is the Congressional Research Service report of November 17, 2021, Navy DDG-51 and DDG-1000 Destroyer Programs: Background and Issues for Congress.

When purchased two per year, DDG-51s cost around $ 2.0 billion each. Due to the reduced production economies of scale that would occur at a production rate of one ship per year, the DDG-51 requested for purchase in fiscal year 2022 has an estimated cost of 2,401.7 million dollars (i.e. approximately $ 2.4 billion). As part of the Navy’s proposed budget for fiscal year 2022, the requested DDG-51 would receive $ 384.9 million in previous year’s Economic Order Quantity (EOQ) funding, a type of funding from Advance Procurement (AP) that occurs under a MYP contract. Taking into account this EOQ funding from the previous year, the Navy’s proposed budget for fiscal year 2022 requests the remaining $ 2,016.8 million (i.e. approximately $ 2.0 billion). needed to supplement the estimated supply cost of the vessel of $ 2,401.7 million. The Navy’s proposed budget for fiscal year 2022 also requests $ 45.8 million in total cost funding to cover the cost growth of DDG-51s purchased in previous years, bringing the total amount of funds to ‘supply requested for the DDG-51 program at $ 2,062.5 million (i.e. approximately $ 2.1 billion)

Purchasing one DDG-51 rather than two DDG-51s in FY2022 would prevent the Navy from meeting its obligations in the final year of the MYP FY2018-FY2022 DDG-51 contract. Navy officials say that as a result, the Navy should pay a fine of $ 33 million to DDG-51 shipbuilders (unless the Navy and shipbuilders reach an agreement to change the terms of the MYP contract ).

Navy officials said requesting the purchase of one DDG-51 rather than two DDG-51s was an affordability measure – a way to help the Navy stay on budget while meeting funding needs other Navy programs. The purchase of a second DDG-51 in FY2022 is the number one item on the Navy’s Unfunded Priority List (UPL) for FY2022 – the list of service programs that it would prefer to be funded in fiscal year 2022, should additional funding become available.

The UPL says that the purchase of two DDG-51s instead of one DDG-51 in fiscal year 2022 would require additional funding of $ 1,659.2 million (i.e. approximately $ 1 , $ 7 billion) in funding for shipbuilding. This figure is not the cost of the second DDG-51 – the cost of supplying the second DDG-51 would be around $ 2.0 billion. The addition of the second DDG-51, however, would reduce the estimated supply cost of the first DDG-51 due to the increased production economies of scale that would result. The figure of $ 1,659.2 million therefore corresponds to the net increase in shipbuilding funding that would be required to purchase two DDG-51s rather than one DDG-51 in fiscal year 2022.